The group was founded in February 2011, in order to be able to perform in the most various dance styles. The members are students of the University of Pécs who are well-trained dancers and happily spend their free-time at rehearsals and performances regularly.

The team has danced together with famous Hungarian actors, actresses, musicians and pop stars at university, city, regional and national events and they have been the cheerleaders of basketball, football and rowing crews. In 2015 the PTE Dance Team cheered for the Harvard and Princeton Universities’ rowing teams in Budapest.

Their first own evening-length dance-theatre show was presented in 2012, called Champagne-Dance-Memories. The premiere of the family dance show called Fabulous... was in 2013, the one of the Big Adventure Around Marriage was in 2016, after which both of them were on stages in different theatres of the country several times.

The official mentor of the UP Dance Team is the Ballet Company of Pécs.

Application is continuous for UP students at the following e-mail address: tancprojekt@pte.hu. 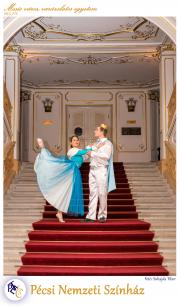